The Earth May Know 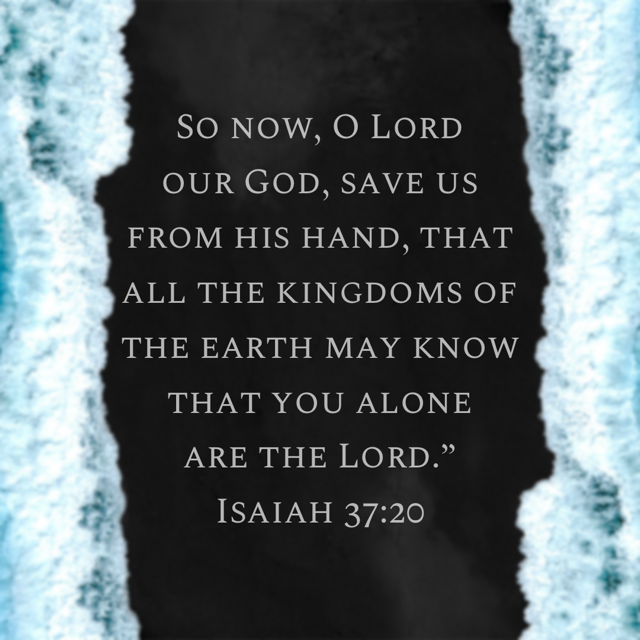 Throughout Scripture we find at different times, the people of God going before Him in prayer. We get a glimpse into the spiritual condition and desires of those seeking after God, and I believe in each situation there is something of great value for us to learn.

The prayer of King Hezekiah in light of Assyria’s apparent invasion is one that captivates me.

15 And Hezekiah prayed to the Lord: 16 “O Lord of hosts, God of Israel, enthroned above the cherubim, you are the God, you alone, of all the kingdoms of the earth; you have made heaven and earth. 17 Incline your ear, O Lord, and hear; open your eyes, O Lord, and see; and hear all the words of Sennacherib, which he has sent to mock the living God. 18 Truly, O Lord, the kings of Assyria have laid waste all the nations and their lands, 19 and have cast their gods into the fire. For they were no gods, but the work of men’s hands, wood and stone. Therefore they were destroyed. 20 So now, O Lord our God, save us from his hand, that all the kingdoms of the earth may know that you alone are the Lord.”

The Rabshakeh of Assyria had come before the city of Jerusalem after capturing the fortified cities of Judah. He now threatened the city of Jerusalem and with it the people of Israel. Rabshakeh’s words struck fear into the hearts of Eliakim, Shebna, and Joah, leaders of the people of Israel appointed by King Hezekiah. The Rabshakeh declared that the Lord had spoken deliverance of Jerusalem into the hand of the king of Assyria, and they ought not to fight the pending outcome of their destruction.

It’s in light of these circumstances that we find King Hezekiah going before God in prayer. A prayer for deliverance, one seeking redemption and protection from a looming empire at the doorstep of God’s holy city. But what strikes me most about Hezekiah’s prayer is the end.

20 So now, O Lord our God, save us from his hand, that all the kingdoms of the earth may know that you alone are the Lord.”

What I find most interesting here is the focus of Hezekiah’s prayer. While he asked for the Lord to save His people, it wasn’t for the benefit of the people. It was for the glory and recognition of the Lord! The benefit of the people was simply collateral. The fact the people would be saved was an outcome of God being glorified through the earth knowing He alone was the Lord.

This leads me to pause and consider the real motives behind my prayers. When I go before God with a request, what is it that I am truly desiring? Is the outcome I want of greater importance to me than what God wants and receives?

The truth is, more than not my prayers are of a selfish nature. They are requests of wants and needs simply because I am needy and want what I want. I become consumed with myself and lose focus on the bigger picture, what’s of greater importance. What’s more important is that others see who God is when He shows up. That the people around me see God is all that He says He is, whether I get what I want or not. It’s not about me, it’s about Him receiving the honor and glory He is due.

Hezekiah wanted to see Jerusalem rescued, no doubt. But more than that he wanted to see people recognize who God was. With Christmas around the corner, it seems fitting to ask the question ourselves: do I care more about getting what I want, or seeing people come to know Christ? When I take my requests before God this season, what’s the priority?

My desire is for God to be known. That’s the greatest priority, and I want my prayers to reflect that.